I figured I’d blog this since not everyone is a Facebook friend, and it’s part of what has kept me a bit on my toes lately.

Many of you will know I’m a furmomma to 2 amazing kitties. I’ve shared my stories about Socks, my 19 year old tuxedo cat, here. However, I haven’t shared much about Matisse. Matisse is my 12 year old feisty torbie. She’s got the most beautiful markings I’ve ever seen in a cat. We adopted her 12 years ago at 8 weeks old and she immediately stole our hearts. Her first moments in the house involved a fight with the “furry dumb blonde” Chow who just wanted to be her friend, and she wanted no part of that. Tortitude.  She loves to play fetch with anything projectile, she loves to snuggle and drool when she’s happy, she has an unending appetite (to the point where I had to have baby locks on the cupboards because she’d rifle them for carbs every night), she’s terrified of strangers and the doorbell, thunderstorms and fireworks. She loves to burrow under the duvet for her naps. Most of all, she loves her “Big Guy”. She’s very much Steve’s cat and I am but second fiddle. She used to mewl about the house after he left for work in the mornings. 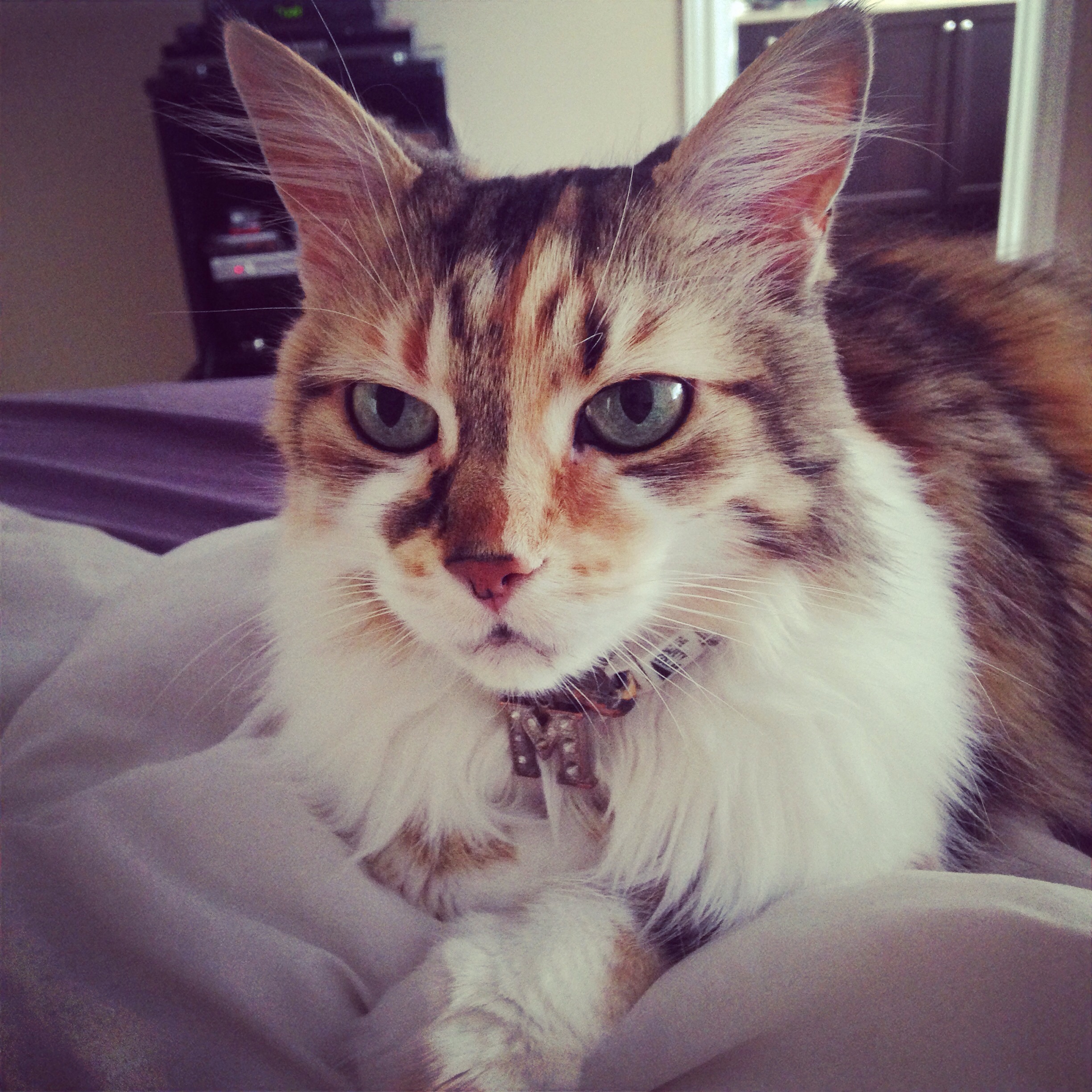 Matisse has been seemingly invincible, until a week and a half ago. When she was young she was mis-diagnosed by a vet as having FIP (feline infectious peritonitis), and the vet refused to spay her and sent her home with a very cold “enjoy her while you can”. Five years ago, when we moved to Brantford, we found an amazing cat clinic and got the “enjoy her while you can” cat reassessed. She was showing no signs of FIP and we went ahead and finally had her spayed. Unfortunately, because she was spayed at such a late age, her risk of feline mammary cancer increased exponentially.  About a year ago we found a mass on her abdomen that has slowly been growing. We knew the prognosis for feline mammary cancer is generally very poor and we wanted to spare her the trauma of the surgery, and us the expense for something with such a futile outcome. So, we opted to keep her home until she started to show signs of pain or deterioration. A week and a half ago she came to bed for snuggles like she normally does and her mass felt different. I turned on the light to find that it had ruptured. She went to the vet that week and we discussed our options.

While cancer is awful, our amazing vet, Dr. Kelly St.Denis, mentioned that Matisse may be a candidate for a new clinical trial going on at the Ontario Veterinary College.  This clinical trial is very much in it’s infancy, but completely fascinating and showing some positive results. And, what’s even more exciting to me is the potential future application towards human breast cancer. Today Matisse met with the study oncologist, had a biopsy and got her first vaccine to start in the trial, and will have her mass removed in 2 weeks. The goal right now is to buy us some time with our wee girl, and buy her a better quantity and quality of life. She’s on pain meds for now, which is going well if I hide it in her food. She hasn’t lost her energy, her spunk, nor her insatiable appetite. Me, I’m crying the happiest tears that she was deemed a candidate for the trial because that gives us a small glimmer of hope.  And the science geek in me is chuffed that my kitty, yes my kitty, is a part of such groundbreaking and potentially revolutionary research and care. Keep fighting little ’tissey! The Rainbow Bridge isn’t ready for you yet!

One thought on “Matisse”