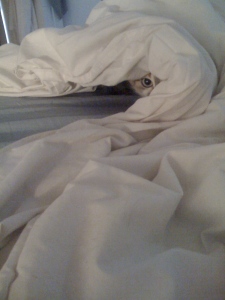 I have a new look for a wee bit, and it’s really just highlighting my World of Warcraft obsession. I’ll probably be changing it again at some point, so for now all my links that were on the right are gone, and I don’t like the stuff at the bottom, but might need to recruit some better HTML skills than what I currently have to fix that.

Last night I don’t think I could catch a single break if I tried. I started off making cabbage roll casserole and in not realizing just how hot my Epicure Multi-Purpose pot gets, I scorched the bottom and thus ruined the pot 😦 Prior to the scorching I was absolutely amazed at how awesome it was for browning my ground turkey and how nice it was to strain with the lid. Lesson learned, the hard and expensive way. I’ll still replace it. I’m just irked at my general stupidity.

Steve has also decided to join me on my cleanse. So I ordered that for him last night in the hopes it will arrive before we leave for Boston. However, I forgot to add something extra on to his order so I have had to place a second order to get it. Again, mad and frustrated with my general stupidity.

Then the Nexus pass! 😦 I’ve barely had the thing a year, they just sent me a new and enhanced card. I was hunting for it all over the house last night and can’t find it. So I had to report it as missing and request a replacement card for a $25USD fee, and another application process that they could very well deny my request for a replacement. And now, I will stress again until I receive my ruling on it one way or the other. The initial application took about 2 weeks, I’m hoping this one will be quicker because I’ve already been approved once. Really fargin mad at my stupidity here – not to mention it could have come in handy for our road trip this weekend.

Today I’m home and have spent the bulk of the day in bed with a burrowed calico cat, still a bit loopy from the Tylenol 3 and in a bit of pain.

Anyone wanting to send me a break can feel free to send it along any time now.